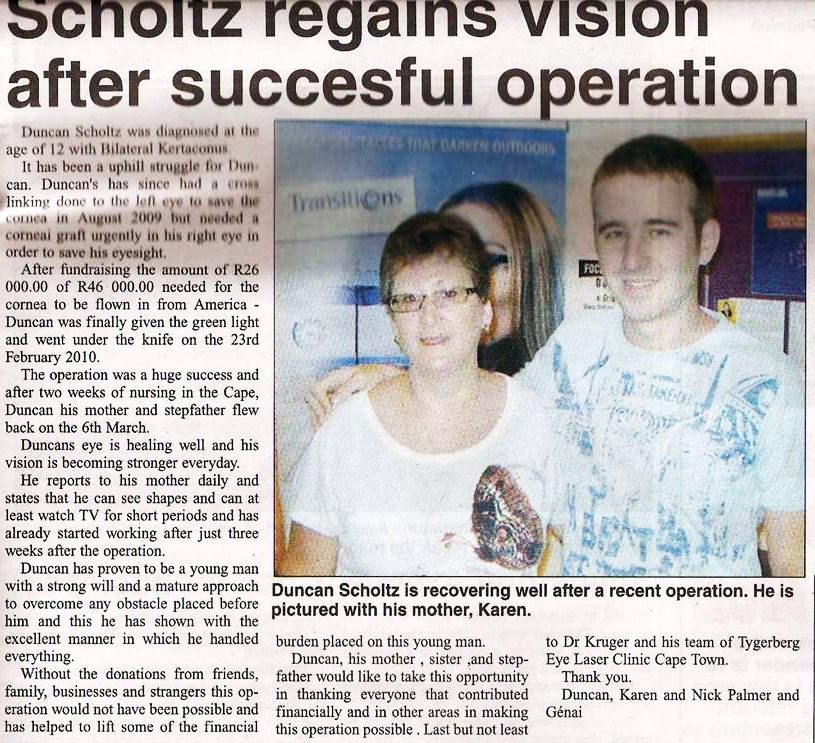 A young patient at Tygervalley Eye Laser Clinic is well on his way to recovery after a recent corneal graft surgery to save his cornea. Duncan Scholtz was diagnosed with Bilateral Kertaconus at the age of 12, and has battled with his eyesight ever since. Keratoconus is an eye condition that affects approximately one out of every thousand people. In essence, it is a degenerative eye disorder characterised by structural changes in the cornea, which causes the cornea to thin and adapt a conical shape, unlike the gradual curve it has in its natural state. Many patients can face vision loss as a result of this disorder, which made Duncan’s condition a challenging situation if not treated as quickly as possible.
After undergoing surgery in August 2009, Duncan again had to go under the knife for an urgent corneal graft in his right eye to save his eyesight. After managing to raise R26,000 of the R46,000 needed for the cornea to be flown from the United States, Duncan was finally able to have the operation he so urgently required, and went under the knife on 23rd February 2010.
The operation was a huge success, and after spending two weeks recovering in Cape Town, Duncan flew back to his hometown in early March. His eye is healing well, and his mother reports that he is able to identify shapes and even watch television for short periods. He was able to start working again after just three weeks subsequent to the surgery – showing a remarkable strength and a mature approach to overcoming every obstacle he has had to endure. With the donations raised from friends, family, businesses and strangers, this operation would never have been possible and the funds have managed to lift some of the huge financial burden that the Scholtz family has been placed under during this challenging time. Duncan, his mother, step-father and sister extend their huge gratitude and thanks to everyone that contributed financially and in other areas to make the eye surgery possible. The Scholtz family would also like to thank Dr. Kruger from the Tygervalley Eye Laser Clinic, who performed Duncan’s cross linking surgery and ensured that this brave patient was able to keep his eyesight.

“Unbelievable! I experienced no pain or discomfort. Everybody was so friendly and professional. My biggest regret is not having it done 10 years ago. It has been life changing.